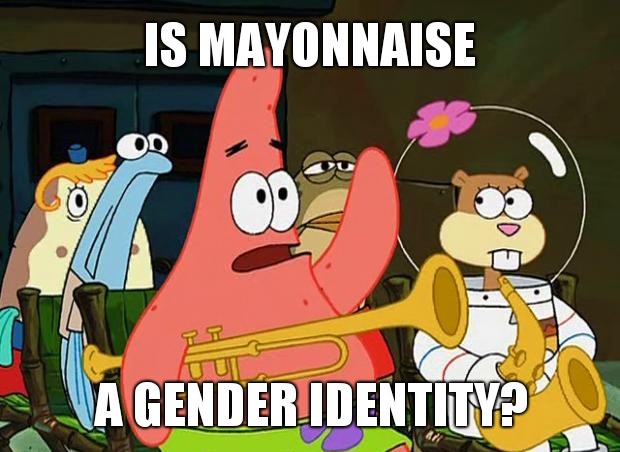 If you can call that science, that is.

I found the following PDF buried beneath many other files in my PC’s “temporary files” directory, where I put stuff that I intend to look into some day and am too lazy to archive somewhere proper:

It’s a meta analysis, i.e. a study summing up many other studies.

For the record, here’s the study on PubMed; I don’t remember how I got my hands on the actual PDF above:

Like any human being, I’m also very prone to cognitive biases (we all are), and I managed to bury this file away for a long time instead of seriously looking into it, obviously because of the subconscious fear of having deeply held ideals challenged by material evidence.

So finally I forced myself to carefully read through it. It’s pretty biased in its own interpretations and conclusions to say the least, so here’s some counter-bias…

A seminal study by Meyer-Bahlburg et al involving outcomes of XY individuals raised as females due to severe non-hormonal, anatomic abnormalities of sex development has provided the most convincing evidence that gender identity is fixed.

So let’s see what the most convincing evidence has to say.

These congenital abnormalities include penile agenesis, cloacal exstrophy [of the bladder], and penile ablation.

Firstly, let’s check out what these conditions are. Penile agenesis means that the penis isn’t properly formed, cloacal exstrophy is a severe condition where internal organs like the bladder and intestines are exposed (the study looked at those in whom the bladder was exposed), and penile ablation means the penis was somehow botched, like in a botched circumcision.

I don’t know the exact kids in question, but as far as I understand, these conditions don’t exactly make the genetically male child look like an average female, like for instance it is the case in complete androgen insensitivity syndrome.

Well, another way to frame it is: a whopping 78% of these genetically and hormonally normal males, who must almost all have had a male gender identity, were quite fine living as women. Where is the debilitating gender dysphoria? 99% of them should have developed dysphoria, not a mere 22%.

Even for those 22% we don’t know if they changed social sex because of “gender dysphoria” or for other reasons, like growing broad shoulders, a deep voice, an Adam’s apple, and a beard… None of which are prevented by being born with penile agenesis, cloacal exstrophy, or penile ablation, remember?

Again though, it would help our analysis a great deal if we had precise information on how many of these kids were also treated with female hormones to ensure a feminine physique. No such information is mentioned anywhere in the meta analysis study, nor the Meyer-Bahlburg study, so we’re left guessing whether maybe they actually developed dysphoria, or just looked into mirror and said “you know, fuck it, I’m obviously a guy LOL.”

Oh and also, let’s see what the actual conclusion of the study in question is, from the study itself, not the biased meta analysis:

The findings clearly indicate an increased risk of later patient-initiated gender re-assignment to male after female assignment in infancy or early childhood, but are nevertheless incompatible with the notion of a full determination of core gender identity by prenatal androgens.

A study by the same group examined the degree of satisfaction with surgical intervention reported by patients with 46 XY genotype also found that those subjects raised as boys were considerably more comfortable with their gender identity.

Let’s quote the parts of it that are public:

CONCLUSIONS: The majority of adult patients with intersexuality appeared to be satisfied with gender and genital status, and did not support major changes in the prevailing policy.

Almost would have guessed!

For the record though, I cut off the last sentence:

However, a significant minority was dissatisfied and endorsed policy changes.

I can understand that, since we’re talking about intersex people, some of whom were likely “treated” unnecessarily. Sadly we have no further insight into their responses to know what they really meant.

OK so that’s the most convincing evidence out of the way. Let’s go on.

Another seminal study relevant to this topic was by Reiner and Gearhart in their review of 16 XY genotype subjects with cloacal exstrophy who underwent female gender reassignment surgery.

Out of the 14 individuals raised as girls, 4 announced they were male and 4 later chose to live as boys when they became aware of their genotype. The 2 individuals who were raised as males identified as males throughout life.

Once again we have no information on whether these genetically male children were treated with hormones, or whether they were left to go through male puberty, which could explain why they begin to see themselves as male.

4 of them saying that they’re male after learning that … they’re literally male should not come as a surprise though, to say the least.

The sexual behavior and attitudes of all 16 subjects ultimately reflected strong masculine characteristics regardless of gender assignment.

Hey, thanks for admitting so openly that “gender identity” is about stereotypes!

Thus, children who were born genetically and hormonally male identified as males despite being raised as females and undergoing feminizing genitoplasty at birth.

Except for the 78% of the previous study you mean, which had a sample size that’s less of a joke.

Although cohort size in these studies is small, these data provide the strongest evidence for biological underpinnings of gender identity.

Ah, the strongest evidence you say?

Damn that was underwhelming.

In congenital adrenal hyperplasia (CAH) the adrenal glands produce excessive amounts of androgens, causing genital virilization with a spectrum of different phenotypes in 46 XX neonates. Dessens et al showed that the prevalence of male gender identity in 46 XX female-raised subjects with CAH is higher than the prevalence of FTM transgender individuals in the general population of chromosomal females. In this study, the large majority (95%) of 250 female-raised patients later maintained a female gender identity. However, 13 (5.2%) had serious problems with their gender identity.

Translation: if you’re an abnormally masculine girl due to a medical condition, you have a higher chance of developing “serious problems with [your] gender identity.”

Sounds almost like “serious problems with gender identity” could result from being bullied for not being feminine enough. Curious!

Note also how the percentage is much lower when compared to the genetic males, who were also raised female but lacked a vagina, in whose case occurrence of “FTM” transgenderism (if we may call it so) was as high as 22%. Could it be that having a vagina is related in some way to your likelihood of accepting the notion that you’re female? Hmm.

5 alpha-reductase-2 and 17-beta-hydroxy-steroid dehyrogenase-3 deficiencies are similar conditions in which synthesis and conversion of testosterone to dihydrotestosterone (DHT) is inhibited, preventing development of external male genitalia and resulting in potential genital ambiguity. As with CAH, affected individuals are often raised as females. In a study of affected subjects, gender role changes were reported in 56–63% of cases with 5 alpha-reductase-2 and 39–64% of cases with 17-beta-hydroxy-steroid dehydrogenase-3 who were raised as girls.

In other words, subtract a vagina from the equation and a child’s chances of identifying themselves as male miraculously skyrockets.

These data support the concept that gender identity might be attributed to hormone milieu during intrauterine development on some occasions.

The study itself is a lot more honest on what that “on some occasions” bit means:

So much for “muh inborn gender identity!!1” (Sorry, had to meme at this point.)

To their credit though:

In these two syndromes, the degree of external genital masculinization at birth does not seem to be related to gender role changes in a systematic way.

Just as an aside, a relatively simple hypothesis NONE of these studies ever mention: prenatal androgen or other hormone exposure or whatever the fuck may have a slight statistical effect on the outcome of your inborn personality alignment and as such make you more likely to become a healthily effeminate boy or a healthily masculine girl, which in turn may cause you to develop gender dysphoria because of society. Why does nobody ever talk about this?

I’m going to stop at this point because I can’t type too much at once (it causes me severe back pain sometimes), and the meta analysis goes on and on pointing at other studies (lots of brain sex stuff too), and remember we’ve covered the most convincing evidence already, so I’ll leave it to your imagination how biased the rest is.

So long, and kind regards,

a person who was chanting “transwomen are women” 3 years ago, until he woke up to the misogyny of it all